‘Syzygy’ on show at RMIT Gallery in Melbourne

When first exhibited back in 2014 my Ekkyklema project of films mounted on glass tiles was presented as a single artwork on three adjoining light boxes. Dissatisfied with the way it looked and felt, a few months ago I began to completely re-think the approach and design. The result, published yesterday, is a series of six discrete but related artworks. I invite you to take to a look.

News: my inkjet print reiterating a cameraless film photograph ‘The End of the Age of Entitlement’ has been awarded the ‘Scope Prize’ for environmental art by the Scope Gallery in the Victorian regional town of Warrnambool. See: http://www.scopegalleries.com and The End, 2014 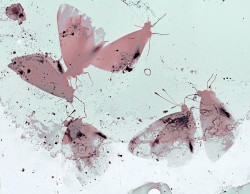 My new series of prints reinterpreting film images of live Bogong moths recorded without a camera at Mount Buffalo has now been uploaded. The new work, Moth Liturgy, will appear in a forthcoming solo exhibition.

Today, at last, images of the bulk of the large format colour and black and white film photographs I created two decades ago have been uploaded to my new website. The images represent two kinds of approach to the subject of landscape: celebratory/documentary (the colour work) and interpretative/expressive (the b&w images). Many of the places shown have changed significantly since the pictures were taken from both ‘natural’ and, more commonly, human impacts. To the extent the images record a lost past many are now historical documents.

I have just uploaded illustrations of the latest (and probably last) artworks in my nine-year ‘Syzygy’ project. Syzygy involved creating images by exposing photographic films to the ambient light of the stars at night at Lake Tyrrell in the Victorian Mallee. The last artwork of the project, ‘Flay‘, is a nine-piece series of human body prints reiterating the graphite imprint on architects paper of two dancers performing on the dry salt bed of the lake in April 2007.