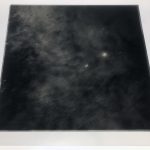 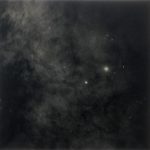 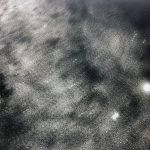 These gelatin silver films replicate an astronomical photograph on glass. The original 14-inch square glass plate of Sagittarius (18h20m –24) was made on I8 June 1974 with the Anglo Australian Telescope at Siding Spring Mountain in the Warrumbungle Ranges, NSW. I borrowed the plate from the private collection of astrophysicist Dr Rachel Webster and exposed two sheets of fresh photographic film under it by starlight on the dry bed of saline Lake Tyrrell in the Victorian Mallee: the first on November 8, 2007; the second on November 30, 2008. In the year between the two exposures the earth rotated once around the sun and the solar system as a whole had moved some 7.26 billion kilometres around the galactic centre. Moiré effects happen when two or more patterns are imperfectly superimposed. I had not intended the films to be overlaid but when I did so (slightly offset) in my studio during one of the pandemic lockdowns of 2021 the immovable moiré of human life – the noise of terrestrial confusion – appeared in emotionally sharp relief. Although the visual effect is distracting, a blur, the individual films are keen: the moiré is doubly ‘true’.