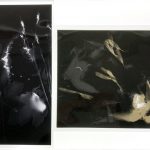 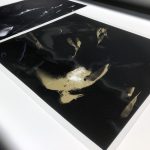 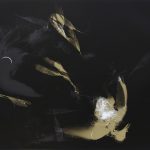 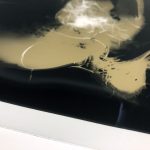 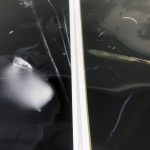 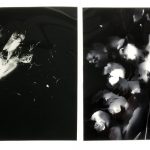 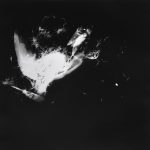 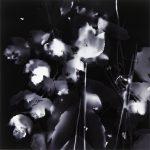 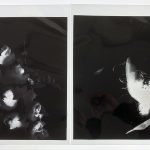 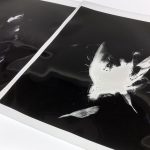 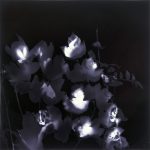 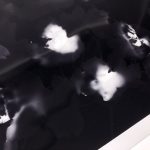 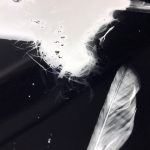 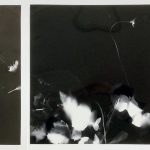 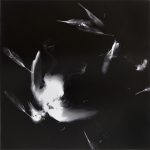 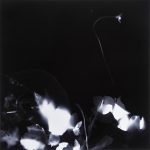 Three two-piece, a three-piece and one five-piece set of toned gelatin silver films recording shadows of a Starling’s body, feathers and Cicada husks and garden flowers made without a camera. Each film and film sandwich is encapsulated in a Mylar envelope. Unique objects designed for display backlit on light boxes.


I found it bloodied, wings-splayed and tangled among Cicada husks tucked between the summer-dry exotic flowers of an unkempt suburban garden. The still-warm, dark, speckled body of the creature might well have just dropped from the searing bushfire-smoked February sky. Introduced by nineteenth century colonists, the inquisitive, omnivorous, fecund, adaptable Common Starling (Sturnus vulgaris) lives up to its name driving out and displacing native birds across Australia’s temperate southeast. Yet its wretched exotic status belies an exceptional musical and acrobatic talent. Entranced by its song eighteenth century composer Wolfgang Amadeus Mozart kept one as a pet so beloved he commemorated its passing with a funeral service. Why and how clouds of Starlings seamlessly execute the seasonal aerial displays known as ‘murmurations’ is a mystery – although each birds awareness of seven neighbors is known to carry through the whole flock, aiding harmonic movement. In ancient Rome, religious augurs divined omens from the shape of their swarmings. Whether or not it fell from a murmuration, the poignant verisimilitude of this little avian corpse can be read as a portent too. It’s mortal gesture is reminiscent of renderings of Icarus who flew too close to the sun but the trajectory of change typified by this invasive species invites predictions both more ecological and ominous.