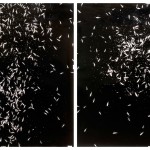 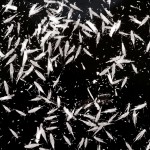 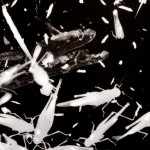 The Impossibility of Knowing the Mind of Another Kind of Living Being, 2011

Swarms of Australian Plague Locusts Chortoicetes terminifera spread across the inland south-east of the continent during the summer of 2010-11. These images reveal them massed (with two dragonflies) on the paper after being exposed to flash without a camera at night near Lake Tyrrell in the Victorian Mallee.

The cluster and scatter of locust shadows looks like stars against the night sky. Unlike stars however these creatures have a sinister reputation. One of the plagues of Exodus, their swarming can feel almost supernatural despite being a semi-cyclical natural event with important ecological function providing food for other animals and redistributing soil nutrient.

The title parodies that of an artwork of a shark preserved in formaldeyhde by Damien Hirst signifying ‘the impossibility’ of imagining death. In so doing, my work instead alludes to the difficulty of imaginatively entering into the subjective umwelt or life-world of creatures such as these, so utterly different from ourselves.