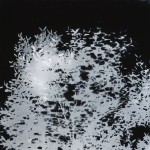 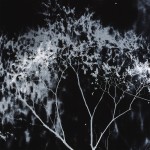 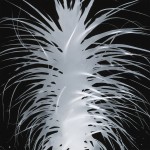 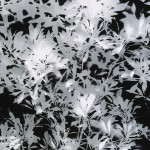 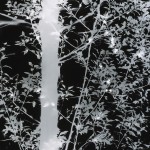 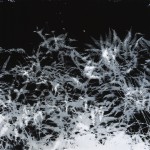 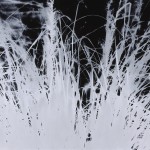 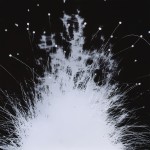 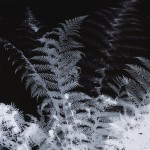 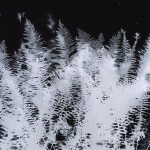 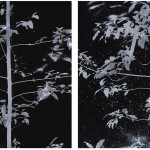 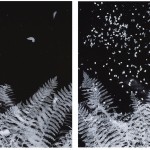 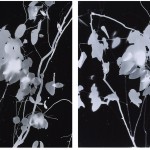 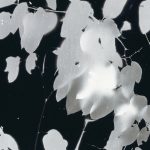 This sequence of photographic works records precipitation at unprotected relict rainforest sites near the West Coast Range, Cradle Mountain and The Great Western Tiers in Tasmania. Capturing shadows cast by living vegetation and the dripping, splashing, trickling and pooling of rain and sleet, the works were made on soft photographic fibre paper, exposed to light at night, without a camera. The finely-detailed, x-ray-like surfaces are torn and scarred by abrasion, marked by vegetation and warped by water.

The Rain reflects upon the tragedy of global ecological crisis through use of the visual tropes of the shadow, damage (to the soft paper), chance and streaming water. Paradoxically, this project about the dependence of wild forest on rain occurred during an unprecedented drought probably linked to global warming. Unexpectedly for normally wet western Tasmania in winter, the work required days and weeks waiting for rain. When storms came they were invariably brief and light: the result is images spotted but never covered by streaming water. An unintended portent?

The title of the three diptychs —Great Western Tears —is both a generic cultural reference and a play on the name of the dramatic escarpment overlooking the last exposure site, the Great Western Tiers, an area renowned for its beauty and a quarter century of forest conservation battles. 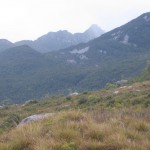 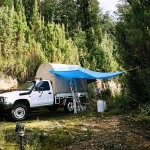 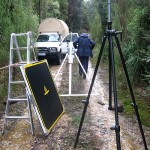 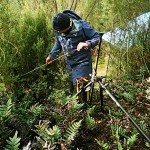 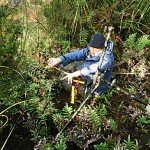 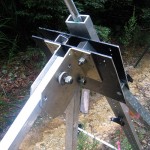 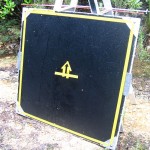 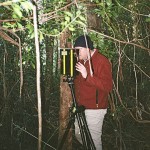 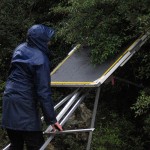 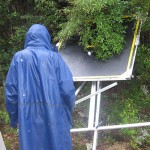 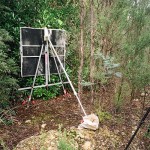 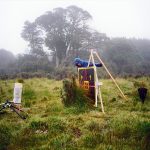 The Rain is a body of work that resides as much in our imagination as it exists as an artwork. The works present us with an unfamiliar view of a fragile rainforest ecosystem – as indexed in the night air, in leaf fall and precipitation amidst the scaffolding of wind, earth, branches and leaves.

The result of such poetic imaginings is a haunting series of photographic artworks by artist Harry Nankin that record the imprints, traces and residues of precipitation within temperate rainforest sites in Tasmania. These life-size outdoor ‘shadowgrams’ capture the fleeting and dynamic cycles of a living environment, and the constant process of growth, form, and decay. The works are more like verbs than definitive subjects: Nankin’s images, which capture the ephemeral and least fixable aspects of nature, resonate further when we consider the inherently poetic act of imaging the rains’ physical presence.

The images are captured by placing large sheets of photographic fibre-based paper in a support frame at night and exposing the emulsion surface to a pre-calibrated flash pulse. The photographic paper is placed amidst the vegetation and foliage and has direct contact with its subject matter. Droplets of moisture impact, disperse and run on its surface as rain, sleet, snow and other forms of organic matter drift across the support distorting, marking, and weathering the paper – scarring, creasing and muddying its surface. Despite the compositions being carefully and deliberately planned during daylight hours the works are exposed to chance, during the set-up and at the moment of exposure. The result is a rich and complex archaeology created from both physical impressions of an actual environment on the photographic surface, and time’s indelible residue.

For Nankin “…such ‘broken’, intricate surfaces revealing an act of human will intervening in ‘nature’ allegorise the ‘flow’ of biotic cycles, the precarious condition of the rainforest site and the immanent ‘tragic’ transformation of all terrestrial nature–including climate itself–into a cultural artefact.”

Process and decay are implicit to the work, and consistent with the thoughtful and considered rationale that Nankin applies to his working methodology. The artist recognises his place as an active participant in the environment, in the cyclical process of experience, response, and expression. It is a reflective presence that necessitates a contemplation of the inhabited environment and the processes through which we engage with it. The Rain is a series of reflective imaginings, poetic and painterly, that directly responds to the contested zone of ‘landscape’. Here, however, the artificial eye has been stripped away to hands and light and paper, to earth and night, branches of air, and swarms of night sounds breathing. As a body of work it evokes a sense of melancholy in its consideration of the natural world – suggestive of a rupture or slippage in time and space between inhabitant and ecosystem, as though the stories that tie and link us to the past are caught in a process of forgetting.

Nankins’ practice is perhaps more closely aligned to environmental sculptors like Andy Goldsworthy or the installation artist Wolfgang Laib, where material processes and indexical relationships are critical in conveying meaning, and where there is a deep sense of spirituality inherent in the process. Fully appreciating the work requires that we move from its photographic genesis – to consider instead the conceptual framework, as a way of thinking through and constructing images and real world relationships. At its core, Nankin’s practice deals with the sublime and builds around a collective relationship with the environment.

The Rain reinstates a sense of empathy towards the natural world, infusing the actions and will of the artist with an intrinsic poetic quality. The images provide a space in which to reflect on the fragile state of habitat and its increasing vulnerability. It is through a sense of impending loss that Nankin invites the viewer to meditate on the inherent character of this precarious relationship through a reflection on the traces, residues and imprints the world leaves behind.